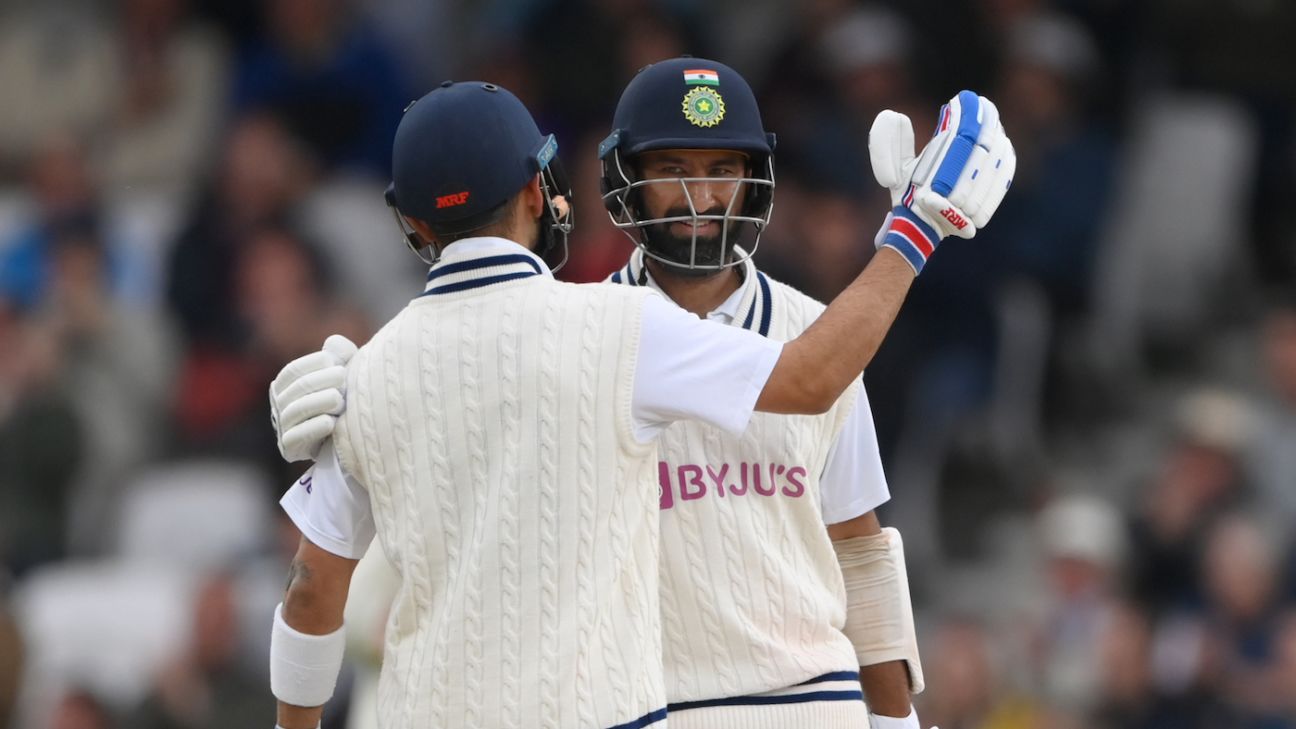 England asserted their dominance on day two at Headingley. Will India be able to change the script change on day three? Follow out updates to find out. All timestamps are in local time. Click here for our ball-by-ball commentary. And here’s our live coverage of the match in Hindi. (Please refresh the page to get the latest)

Root and Moeen have rifled through these overs late in the day, and England now have the second new ball due. Root asks the umpires if the quicks can come back on, but of course, with the light situation having not got better, he is told that he can’t. Decides to take his team off the field instead, so that he can have his quicks nice and rested, coming back in with the bright red Dukes ball tomorrow.

India, though, will be pretty pleased with their day’s work. Conceded less than 10 runs before wiping out the two last wickets this morning. Since then, each of their top four have put in time at the crease. Rohit and Rahul fought through the most difficult period in the gloom before lunch, until Rahul was out off the last ball of that session. Pujara and Rohit then batted out the second session, each making half centuries. They saved their best partnership for the end of the day though – the stand between Pujara and Kohli now worth 99.

They’ll come back tomorrow knowing there’s a big fight on their hands still. They remain 139 runs behind, with only eight wickets in hand. They’ll fancy their chances of making England bat again, at the very least. But if the clouds stick around, and there’s some movement early, the hosts might back themselves to get some early wickets as well.

Join us then. The full day’s report will be out shortly.

Pujara is well into his 80s…

…making use of some fairly straightforward spin bowling to make some brisk late runs. This score, by the way, is now his highest since January 2019, when he hit 193 in Sydney.

The umpires are thinking of taking the teams off. From the TV images it seems like the floodlights are providing most of the illumination at the moment. I don’t think it’ll be long before play has stopped for bad light, but for now, they are allowing England to keep bowling, so long as only the slow bowlers are in operation. So on comes Joe Root. Don’t laugh. Man’s already got a five-for against India this year, he’ll have you know.

England turn to the mighty Mo

Not a lot is happening for the seamers anymore (the ball is almost 65 overs old), so Root finally goes back to Moeen Ali. He’s got more wickets against India than any other opposition by the way: 52 dismissals at an average of 32.94. Against teams he’s played more than five Tests against, he’s only got a better average against South Africa.

Here’s something interesting. In both partnerships he’s been involved in so far, Che has outscored his partner. Those partners being limited-overs behemoths Rohit Sharma and Virat Kohli. (The one caveat is that England have given Pujara a lot of legside hit-me balls.)

I’ll let Alan Gardner over on ball-by-ball describe the two boundaries Kohli hit in the last Anderson over.

Anderson to Kohli, FOUR, sprayed leg side and Kohli clips him bloodlessly through backward square, a bonus boundary gratefully accepted by India’s captain

Anderson to Kohli, FOUR, easy driver! Full in the channel and Kolhi shifts the weight forward to ping Anderson past extra cover, Moeen won’t be catching that!

Anderson, by the way, hasn’t been quite at his best today. A lot of legside balls, maybe because he’s gone in search of that hooping banana swing.

P.S. After another poor over, in which he leaked two successive legside boundaries to Pujara, Anderson was taken out of the attack.

It had been 11 completed innings since his last half-century, but just as it seemed like his place could be on the line, Pujara produces a fifty in demanding conditions. Fittingly, he gets there with a legside boundary – clubbing, a Craig Overton bouncer aerially over square leg. He’s batted pretty briskly given the situation too, reaching the milestone off the 93rd delivery he faced.

Still. If he’s to do India’s match outlook any good, he’s got to be thinking about doubling his present tally at least.

Robinson finally gets an lbw

Look, Robinson deserves this wicket, but why must it be Rohit who has to go? Life is a disappointment sometimes. All day long, Robinson has been threatening pads, raising big shouts and prompting reviews. This one hits Rohit in front of middle and leg, beating Rohit’s defensive shot, after nipping back from just outside off. Umpire Kettleborough gave it out, but Rohit reviews as there’s a chance it’s sliding down leg. No such luck though. Ball tracking shows it shaving leg stump, and the umpire’s decision stands. Rohit’s gone for a good-looking 59, which, typically, leaves fans wanting more.

Kohli’s here now though. And Anderson, who was taking a breather, promptly reappears on the field as well. We might be in for another mini-war.

Rohit and Pujara hang in there

India’s first truly successful session with the bat in the Test – Rohit the lynchpin so far, paring his game down to its essentials, leaving well, blocking plenty, looking largely effortless while doing so, though.